This ancient church of St Nicholas, one of over 400 churches in England with a similar dedication. St Nicholas was a rather obscure Bishop of Myra in Turkey.  Books relating to his persecution and death reached Europe in the 11th Century, as well as the legend, that he gave dowries to a poor citizens three daughters so that they could marry.  This story clearly caught the imagination of the church builders, he has at various times been the Patron Saint of Travellers, children, brides and sailors.

The present church , now over 800 years old, is situated on rising ground overlooking the English Channel. The building is thought to date from around 1130,  the first Rector of Ringwould being  recorded as Everadus in 1153. It is possible that a wooden building previously stood on the site as the village has had settlements since the Bronze age, and Saxon graves were recorded nearby.

The present building is certainly predated by the two mighty yew trees in the churchyard, the easternmost one having been aged as 1300 years and the other at 1000 years.

The original  12th C church consisted of the present nave and part of the chancel. Standing at the back of the church it is easy to see that these are not quite in alignment, but whether this is due to a fault with the original builders, or deliberate we can only guess at.  During the next century the chancel was enlarged to its present dimensions.

The final expansion of the building took place in the 14th C when the North aisle and porch was added. The porch would have been a very welcome addition as many of the rites such as baptism started outside the church and had been open to the weather. The village had by this time risen in both size and importance, King Edward II, having in 1326 , granted a charter giving permission for a weekly  market and an annual fair on the feast of St Nicholas . 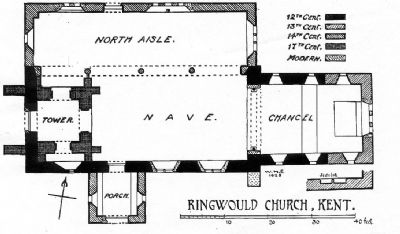 The village must have continued to grow as in 1578 it was recorded that the church had 60 communicants, by 1640 this had risen to 170.

The church originally had a wooden spire but by the early 17th century this was in a dangerous condition. In 1627 the villagers petitioned the archdeacon to demolish the spire and replace it with a flint and brick tower, requesting that they be allowed to keep the lead from the old spire as the cost of the new tower was over £100 and the lead worth £28 which would greatly help with the expenses. The tower was to have pinnacles or ornaments of which only the present cupola remains. For many years the figures 1628 in iron figures were affixed to the tower.

There are 6 bells, one from the 14th century, 4 dated 1638 and one added as late as 1957, hence the discrepancy with the name of the village pub. They are still rung regularly on most Sundays, and for weddings etc.

7-69 the church underwent huge alterations, designed by the Architect William White, so that most of the surface of the church that we now see dates from that period.  The exterior of the church, excepting the tower, had been rendered, the rendering was removed and flint facings added. The nave roof which had been lower than the chancel was raised to the same height. The windows were altered mainly for the sake of uniformity and to let in more light , the east window being altered to the popular ‘gothic’ style . The only original Norman windows remaining being the one containing the representation of St Nicholas in the West wall of the tower, and in the south wall near the porch. Two trefoil headed windows remain in the chancel.  Inside the church, alterations were no less drastic. The box pews, pulpit, choir stalls, font and a small west gallery were all swept away , in favour of the present layout . The small organ was installed, dated 1879 and it is still in use.

There was some reordering in the 1920’s with the organ being moved to the north aisle and the pulpit against the south wall, at the same time . Coke fired central heating and electricity came later.
The East window  ‘blew in’ on one Boxing Day in the early 1980’s. It was deemed impractical to repair the window, so a simpler, lighter window reusing the original picture panels was made.

In 2008 The church finally arrived in the 21st Century when the Vestry was remodelled to incorporate a small kitchen and a Hi-tec composting 'loo'. The pews from the North aisle were also removed to give some flexible space.

THINGS to LOOK OUT FOR

To the right is a 12th century Mass Dial, 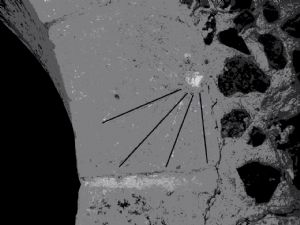 used like a sun dial before the advent of clocks so that the priest and others  could tell the times of the several daily services.

On the door frame 'Crusaders Crosses’ , there are several well cut crosses in the stonework of the original main door frame. Legend has it that crusaders returning from the Holy Land would blunt their swords on the doors of the first Church they saw.

Above the main door.    Royal coat of arms of George IV.

At the rear of the church

Few remain of the many original brasses, apparently many were lost to 18th century souvenir hunters.

There remains this one of John Upton dated 1530, 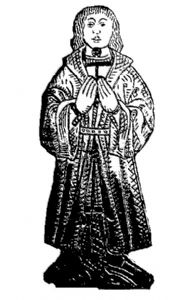 there is also the remains of the children of William Abere, and a lady possibly Elizabeth Gaunt 1580.

These are now displayed on a wall display.

In the main aisle (under the carpet) is a brass memorial to John  Jenken of Oxney.

There are many fine memorials on the church walls, the oldest of marble and alabaster ,in the chancel to Richard Dauling who was Rector 1651—1679. There are then many to various members of the Monins family.

To the left of the main door is one to George Gipps, Rector at the end of the 18th and beginning of the 19th century. He is interred at the foot of the tower. 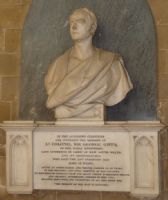 George his eldest son , born in Ringwould,  was a distinguished soldier, serving in the Peninsula, France and the Netherlands under Wellington.

In 1835 he was knighted and sent as a commissioner to Canada. He then became Governor General of New South Wales and his name lives on in Australia in ‘Gippsland’,near Melbourne,  named after him. He is buried in the cloisters of Canterbury Cathedral.

The churchyard has many fine 18thC memorials most notably the group belonging to the Taylor family adjacent to the east wall. The churchyard has been extended over the years, there are no original records of the older part , but the Memorials of this part were catalogued by the Ringwould History Society in 2001.